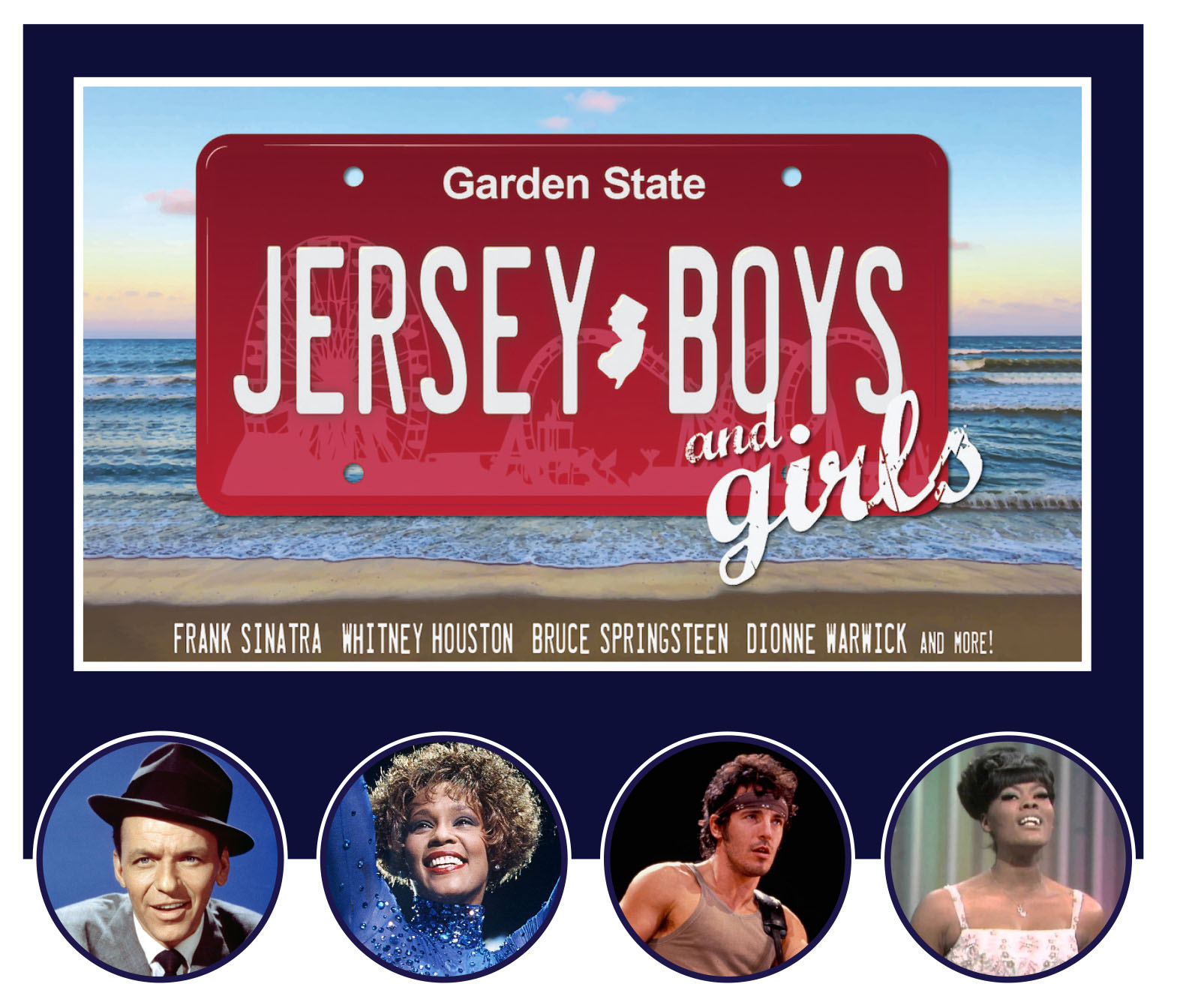 Expect such hits as Fly Me To The Moon, My Eyes Adored You, That’s Life!, They Can’t Take That Away From Me, Can’t Take My Eyes Off You, I Will Always Love You and more! The Concert program contains the following –

JESSICA HENDY is widely recognized as one of Broadway’s best belters. She played the role of Grizabella in CATS in both the original Broadway run and the 2016 revival cast, becoming the only person in history to have appeared in both Broadway incarnations of that smash hit musical. Other Broadway credits include AIDA (Amneris), and AMOUR.  She has toured Nationally and in Canada in CATS (Grizabella) and Joseph and the Amazing Technicolor Dreamcoat (Narrator). Her one-woman musical “Walking With Bubbles” is currently having a pre-Broadway workshop. In New York, she received rave reviews for her one woman cabaret, “A Life To Call Your Own,” and a Bistro Award for the review Get Your Tickets Now.  NYC Pre-Broadway workshops include DANCE OF THE VAMPIRES, AIDA, and THE MOLLY MAGUIRES. She played Diana Goodman in the regional premier of the Pulitzer Prize winning musical NEXT TO NORMAL, at The Ensemble Theatre of Cincinnati.  She has had the pleasure to work at many theatres around the country including Pittsburgh CLO and North Shore Music Theatre in MISS SAIGON (Ellen), and Helen Hayes Perf Arts Center in SONGS FOR A NEW WORLD with Jason Robert Brown.   Ms. Hendy’s performance as ‘Jeanne’ in THE GREAT AMERICA TRAILER PARK MUSICAL at The Ensemble Theatre of Cincinnati earned her an ACCLAIM Award for Best Actress.  She regularly appears with symphonic orchestras around the world in a variety of concerts including “Music of the Knights,””Rock ‘N Radio” and “Blockbuster Broadway!” Ms. Hendy is a proud graduate of the University of Cincinnati College-Conservatory of Music

Ashton Michael Corey is a New York City based actor, singer, and multi-instrumentalist. Recent theatre credits include the National Tour of “A Gentleman’s Guide To Love And Murder” (Tom Copley/ US Monty), “Once” at TheatreSquared (Svec),  “Closer Than You Think” at Strange Sun Theatre (Billy), and “Pip’s Island” Off Broadway (Pip). Recent concerts include “A Star Is Born: The Concert” at 54 Below, “Jersey Boys & Girls” with the Ocean City Pops, “Broadways Greatest Hits” at 54 Below, and “Broadway Rising Stars” at Town Hall (NYC). Ashton is a graduate of Marymount Manhattan College. Website: ashtonmichaelcorey.com Instagram: @ashtonmcorey

SCOTT COULTER is one of New York’s most honored vocalists. For his work in cabaret, Scott has received five MAC Awards (Manhattan Association of Cabarets & Clubs), five Bistro Awards and two Nightlife Awards for Outstanding Vocalist and has performed at most of NYC’s top rooms including Birdland, 54 Below, The Oak Room at the Algonquin, and Feinstein’s at The Regency where he spent a record-setting eight months performing the revue 11 O’CLOCK NUMBERS AT 11 O’CLOCK which he also co-created, directed and musically arranged. His self-titled debut CD won the 2003 MAC Award for Outstanding Recording and was chosen as the best recording of the year by TheatreMania and Cabaret Scenes magazines. Scott was director and star of A CHRISTMAS CAROL: THE SYMPHONIC CONCERT in its world premiere with the Baltimore Symphony and reprised his performance in the Emmy-nominated PBS production which premiered in December 2013.Since 1997, Scott has performed around the country with award-winning songwriting duo Marcy Heisler and Zina Goldrich in their many revues. While singing with Goldrich and Heisler he was discovered by Oscar and Grammy winning composer Stephen Schwartz who then invited him to join the revue STEPHEN SCHWARTZ & FRIENDS. That revue (starring Schwartz and Coulter along with Liz Callaway and Tony Award-winner Debbie Gravitte) has been performing all over the world since 1999. Schwartz has said, “One of the greatest things that can happen to a composer is to have his music interpreted by Scott Coulter.”Scott regularly performs in concert both as a solo artist and with a variety of legendary performers including Stephen Schwartz, Tony-winner Ben Vereen and Grammy-winner Sheena Easton and has performed with symphonies all over the world including San Francisco, Baltimore, Seattle, Phoenix, Winnipeg, St. Louis and Calgary.As a director Scott’s credits include many shows for The Town Hall in NY (BROADWAY BY THE YEAR, BROADWAY’S RISING STARS, BROADWAY ORIGINALS, BROADWAY UNPLUGGED) and BBTY for The Berkshire Theatre Festival and Broadway by the Bay. Along with Michael Kerker and ASCAP, he’s produced and directed several installments of Michael Feinstein’s STANDARD TIME at Carnegie Hall. He is creator, arranger and director of several touring shows including CINEMA TOAST, SOUTHERN COMFORT, BROADWAY’S ELITE, THAT’S LIFE: A TOAST TO SINATRA, YOU’VE GOT A FRIEND: CAROLE KING, NEIL SEDAKA AND THE MUSIC OF THE BRILL BUILDING, BLOCKBUSTER BROADWAY! and his critically acclaimed solo show, THE FELLA SINGS ELLA, which honors the life of the legendary Ella Fitzgerald. His concert creation THE KING: THE MUSIC OF ELVIS premiered with the Calgary Philharmonic and is currently playing symphony halls across America and Canada. Scott recently wrote the book for the new musical GOT TO BE THERE which celebrates the life and music of songwriter Elliot Willensky.Scott is founder/owner of Spot-On Entertainment and Spot -On Arts Academy and is a resident director of programming at 54 Below (Broadway’s Supper Club) in NYC.  He is the artistic director of the Pocono Mountains Music Festival and a proud graduate of the Cincinnati College-Conservatory of Music which honored him with the CCM Young Alumni Award in 2010 and CCM’s Distinguished Service Award in 2020.

RYAN SHIRAR is a New York City-based conductor, music director, and orchestrator who takes pleasure in sharing the stage with a diverse range of artists.  Trained first as a classical pianist, Ryan now works largely in the development of new works in classical, pop, and theatrical genres and is most widely known for his work with American symphonies, most recently, the Signature Symphony in Tulsa, Oklahoma.  Recent orchestration projects include One Voice: The Songs We Sing (PBS Series), This Time of Year (album), Brian Stokes Mitchell Plays With Music (album), What Would Petula Do? (concert), The Wedding Gift (musical).  He also currently serves as the music director for the renowned international touring group, The Four Phantoms.  He has performed globally at venues ranging from Carnegie Hall and Lincoln Center to Aspen Music Festival and Theatre du Chatelet (Paris).  He received his Masters in Orchestral Conducting from Cincinnati College-Conservatory of Music.