Words and Music with Vivace 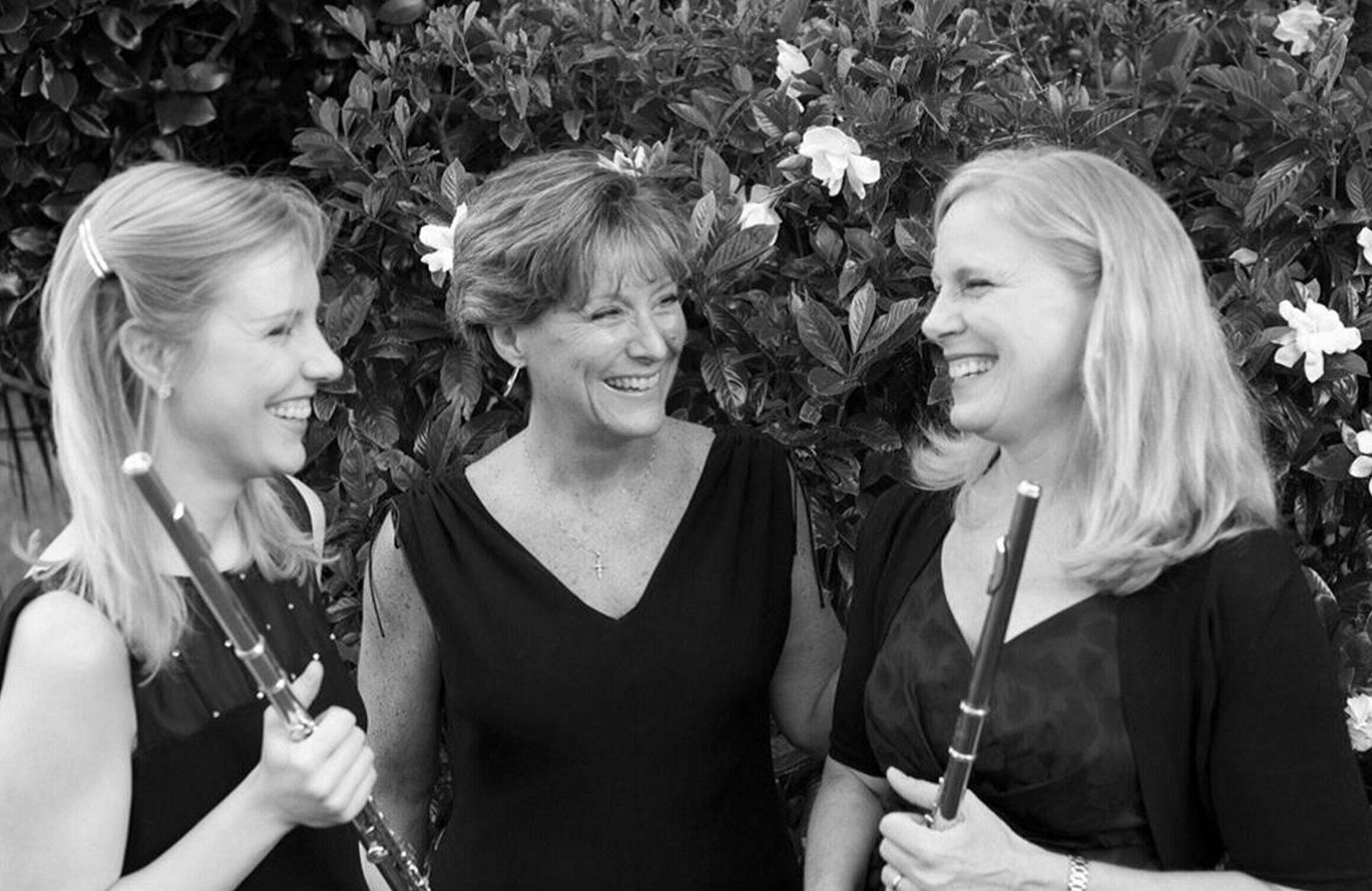 Words and Music with Vivace

Jacksonville’s dynamic Vivace Trio features two flutes and piano, intertwining soprano voice. The music performed emphasizes the sheer power and energy of the flute duo, while also striving to highlight vocal like qualities and sensitive blend possibilities within the ensemble. The vivacious relationship between these musicians creates a unique, joyful and unforgettable synergistic effect. “With impeccable musicianship and captivating personalities, the Vivace Trio is an audience favorite and among our most-requested ensembles for return engagements.” – Ed Lein, Jacksonville Public Library’s Intermezzo Sunday Concert Series For performance clips and more information about the ensemble, please visit the Vivace Trio facebook page or call 904.669.1975 or email carolynmusician@comcaset.net

The Artists As an accomplished flutist and singer, Carolyn Snyder Menke sees no boundaries in the pursuit of music. She has achieved artistry and excellence in interpretation, sound, and technique. As several conductors have commented, her sound on the flute is notably richer and rounder because of her singing background. Ms. Snyder Menke originates from Chicago, Illinois where she had the good fortune to grow up in a musical family. Carolyn has an A.A. in Music from College of Marin in Kentfield, California and a B.M.E. with a concentration in flute from Indiana University. At Indiana University, she studied with James Pellerite, who was principal flutist with both the Detroit and Indianapolis Symphony Orchestras and played with the Chatauqua Symphony. After graduation, she studied privately with Peter Lloyd who was the first flutist in the London Symphony Orchestra. Ms. Snyder Menke studied voice with Kathleen Curley, a student of the Juilliard school who taught voice in Jacksonville and the renowned Metropolitan opera star, Marilyn Mims. When Ms. Snyder Menke sang in the German lieder masterclass taught by the renowned Elly Ameling in Oberlin’s Italy program, Elly Ameling exclaimed “perfection!” after Carolyn’s performance of Nacht und Träume. Carolyn also sang several opera roles in Atlanta’s Harrower Summer Opera Workshop including Susannah from The Marriage of Figaro, the foreign woman from The Consul and Irma from Charpentier’s opera, Louise. She won the Thomas Scott Award in Marin County, 2nd place in the NATS competition, and was a quarter-finalist in Savannah Georgia’s American Traditions Competition for Singers. She has performed for many years in a variety of orchestras and ensembles including the Jacksonville Symphony Orchestra, the Arabesque flute trio, the Marin County Woodwind Quintet, the Arioso Flute Quartet, and currently Vivace, a two flute and piano ensemble. Carolyn has been performing for Body and Soul, the Art of Healing since 2001 and also freelances around the Jacksonville area. Carolyn and her husband study ballroom dancing with Pasha Cherdantsau.

Classical flutist, Gia Sastre has spent many years performing as a freelance soloist, chamber musician and orchestral player. Notable solo engagements have included recitals at Preston Bradley Hall in the Chicago Cultural Center, the Art Institute of Chicago and the historic Friday Musicale of Jacksonville. She has also performed recent concerts for Music @ Main Intermezzo Series, Riverside Fine Arts and Riverside Presbyterian’s Wednesday Happenings. As a chamber musician, Ms. Sastre has appeared with Chicago’s CUBE ensemble, Accessible Contemporary Music, the Seram Flute Quartet and the Chamber Music Society of the Good Shepherd among many others. Ms. Sastre performed with Chicago harpist AnnLaura Tapia for many years and their recording, entitled Abellimento, a collection of flute and harp classics is available on Pandora, iTunes and Amazon. Ms. Sastre has also performed with the Jacksonville Symphony Orchestra, the Coastal Symphony of Georgia, the Highland Park Strings Chamber Orchestra and others. As an educator, Ms. Sastre works with many dedicated and talented students through her private studio. She also teaches applied secondary flute at the University of North Florida and has taught at the UNF Summer Music Camp and helped present the UNF Annual Flute Day. Previously, she served as flute faculty for the DePaul University Community Music Program in Chicago. Ms. Sastre has presented recitals and masterclasses at Florida State University, Emory, DePaul and St. Xavier University. She is a founding member of Jax Flutes, has served as adjudicator for the Florida Flute Association, program designer for the Chicago Flute Club and was a member and Farwell Performance Award winner of the Musicians Club of Women. Originally from Miami, Fla., Ms. Sastre holds a Master’s of Music in Flute Performance from DePaul University, where she studied with Mary Stolper and a Bachelor’s of Music in performance from Florida State University, studying under Charles Delaney and Eva Amsler. Ms. Sastre also traveled to Great Britain to pursue a resident course of study with Paul Edmund-Davies, then principal flutist of the London Symphony Orchestra.

Among the First Coast’s most sought-after collaborative pianists, Jacksonville native Denise Wright received her Bachelor of Music degree in Piano Performance from Samford University in Birmingham, Alabama and her Master of Music in Piano Performance from Indiana University in Bloomington. She performed many times as a soloist with the orchestras at both universities, as well as in numerous solo and collaborative concerts with a variety of instrumental and vocal soloists and ensembles, including a tour of Europe with Samford’s Baptist Festival Singers. She was a Professor of Piano at Bethel College in Mishawaka, Indiana and a collaborative pianist at both Indiana University and at St. Mary’s College (Notre Dame, Indiana). Returning to Jacksonville in 1991, Ms. Wright assumed the position of pianist at First Baptist Church, and has served as collaborative pianist at Douglas Anderson School of the Arts since 2004. She joined the staff of the University of North Florida in 2007, working with several voice studios as well as with the UNF Opera Ensemble. In the summers of 2010-2012, Denise had the opportunity to perform with the Opera Ensemble as part of the European Music Academy in the Czech Republic, and in the historical Mozart Estates Theater in Prague